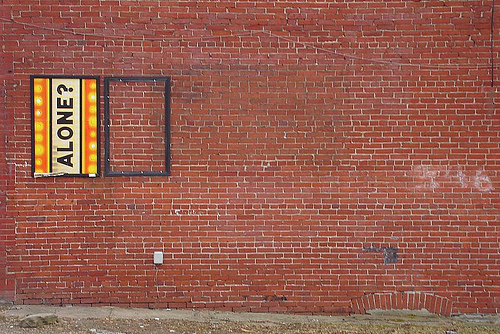 I am about 2 or 3 years into the emergent/missional conversation/movement. I come from a very conservative, evangelical background and have had to come to terms with the realization that a lot of stuff that I believed, a lot of things I said and did, and a lot of people I supported in the past were wrong. The journey has been exciting but also disconcerting and painful at times. I am thankful that there are people out there that have challenged my thinking/motives/actions/beliefs. I no longer think of myself as conservative or liberal but a follower of Christ – but since that can sound vague and like I am trying to avoid giving a straight answer (to some) I guess I would say that I am a moderate – although my conservative friends would probably think me to be liberal these days and my liberal friends would say I was still a conservative just not an extreme one :>) Anyway, on to the point of this post…

What concerns me is that so many of the very people who have challenged me and my conservative views seem to have gone soft and are doing some of the same things that they rightfully criticized me about.

For instance – when I pointed out that $170 million dollars would be better spent on helping people rather than staging an extravagant inauguration (I did this on facebook and twitter) I barely got a bite. My friends there are mostly liberal (sorry for the label) and supporters of Obama (which is fine with me – I almost voted for him) but I don’t think they would have given a republican or a conservative that kind of break (and I don’t think they should).

And then – when I pointed out that I thought the end of Rev. Lowry’s prayer contained racist speech (again on facebook and twitter) I got even less response. I was careful to explain that I wasn’t calling Rev. Lowry a racist (I know very little about him) but that I thought calling Native Americans “red”, Asians “yellow”, saying that “yellow needed to mellow” and saying white people, in general, are racist, was racist speech even if it was contained within a rhyme that has been around for a long time in black churches. I talked about racism lurking in people’s lives (no matter what race they are) even without their knowledge and that when we see or hear racism we should point it out and speak against it.

Now maybe I am wrong, but I got the feeling that I was breaking some sort of unwritten law, or treading on “holy” ground, or something. No one reprimanded me but the passion that is typically there was absent – the critical eye was missing – the silence said a lot (IMHO).

I don’t say any of this because I didn’t vote for Obama. I think there is a possibility that he will make a great president and do many good things. I was honestly worried about his lack of experience – particularly with the war and economics – but maybe that will end up being a plus – I can see that side of the argument.

I say this because I don’t want my wonderful new friends, who have challenged me for my own good, to go soft because Obama is President. I want them to keep examining and questioning and pointing out discrepancies and injustices – even if it is with people they support and agree with on most everything.

Am I all alone here? Or does anyone else know what I am talking about?