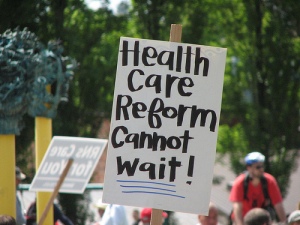 The letter says that “despite false claims to the contrary, the Senate bill will not provide taxpayer funding for elective abortions.” The letter goes on to say the legislation will help support pregnant women and “this is the real pro-life stance.”

In an interview aired on CNN, Sister Simone Campbell, executive director of Network, a national Catholic social activism lobby, expressed that the bill was clear in that it did NOT allow for federal funding of abortion.  You can watch the interview here.

Bart Stupak, the Representative who seems to be going overboard on this issue, responded to the news by saying “When I’m drafting right-to-life language, I don’t call up the nuns,”

WHY NOT, BART?  They have more experience working with the poor and the Catholic hospitals than the Bishops do.  Why wouldn’t you want to consult them?  Is it because they are women?  Or is it just nuns, and not all women, that you dismiss so easily?